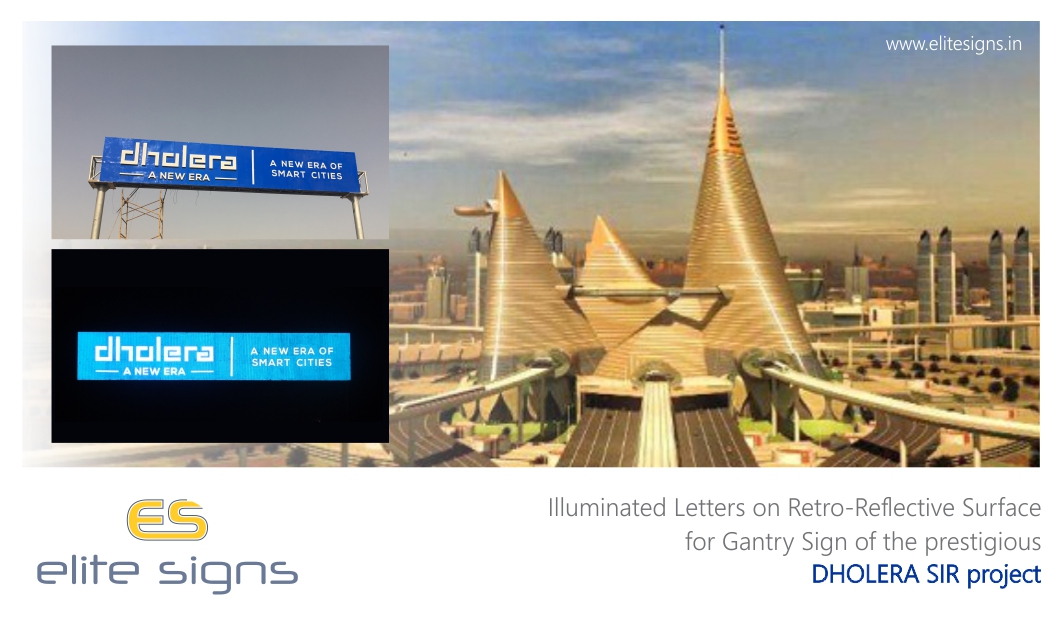 Dholera SIR is a dream project of Indian Prime Minister Narendra Modi. He envisioned Dholera as a futuristic city, twice the size of Mumbai, with the best of technology and infrastructure. The vision was laid out while he was still holding the Chief Ministers office for the state of Gujarat. In last  5 years the project has seen rapid progress and thousands of hectares of land have been released for development by Gujarat Government. The vision statement as published by the Dholera SIR organisation claims to make Dholera “The engine for economic resurgence of the country which is supported by world class infrastructure.”

Everyone at Elite Signs were thrilled to have got this fantastic opportunity, to be a contributor for this mammoth project. While the project is still under development and it will take quite some years till it reaches fruition, the one important thing it needed was Signage ! Elite Signs has been a provider of top-class sign solutions and it is heartening that the diligent team of Dholera chose us to do their signages. A project which is aiming to set new benchmarks in infrastructure has to have signages that reflect that vision.

The project included creating a signage on the MS Gantry installed at the entrance of the Dholera SIR (Special Investment Region). The signage had to serve dual purpose; one to provide a sense of direction and establishing the ‘entry’ and secondly serving as the brand communication medium to its stakeholders. This led to a lot of thinking and eventually, as it would suit such a futuristic project, an innovative idea was chosen for the signage. In normal cases such industrial signs are treated like the Highway Signs i.e Retro Reflective Decal application of aluminium composite material. In this case we took a step more. We mixed the concepts of Highway Sign with a Hospitality sign and created the sign with Reverse Glow SS letters installed on a Retro Reflective Surface. The face of SS letters again are pasted with Retro Reflective Surface. This is one of a kind signage in India.

We are extremely proud of the sign. Installing it was a feat by itself. As the location of the Gantry did not have any utility support. We built a scaffold, used a portable Gen Set to run installation equipment and carried out the installation with utmost care and precautions. The result is stunning and the Dholera SIR officials are considering more such signages to enhance the movement within the marked area.